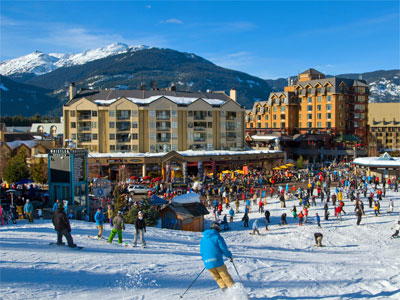 Just half an hour from the hustle and bustle of Vancouver is the start of the Sea-to-Sky Highway. The highway clings to the rugged cliffs and peaks of the Coast Mountain range on its way to the towns of Squamish, Whistler and Pemberton.

Numerous rivers, creeks and waterfalls plunge down the mountainside to empty into the blue waters of fjord-like Howe Sound. The highway winds along this scenic corridor and provides spectacular views in every direction. This is an outdoor recreational paradise, but the area is also rich in history with the highway intersecting with the historic Gold Rush Heritage and Pemberton trails from the days before the automobile. The community of Britannia Beach once boasted the British Empire’s largest copper producing mine. Today the mine is a National Historic Site and home to the BC Museum of Mining.

At the head of Howe Sound, the District of Squamish is one of Canada’s top ten recreational destinations. Calling itself the “outdoor recreation capital of Canada” the area is a mecca for windsurfing, mountainbiking, scubadiving, hiking, kayaking, rafting, golf and many other activities. The Stawamus Chief towers over the entrance to the valley. The Chief, as it known, is the second largest free-standing granite monolith in the world and a mecca for rock-climbers. The Squamish spit, at the mouth of the Squamish River, is a prime windsurfing location where thermal winds in summer allow surfers to reach speeds of over 60 km. per hour.

Squamish is also a great stop for railway buffs. More than 60 vintage railway cars and locomotives are parked at the West Coast Railway Heritage Park. One of the park’s most recent additions is the Royal Hudson #2860 steam locomotive which ran between Vancouver and Squamish for many, many years. If you visit Squamish during the winter months you get a chance to view the world’s largest concentration of wintering bald eagles. Thousands of these majestic birds gather near the village of Brackendale to feast on spawning Salmon.

Past Squamish and on up the Highway is Whistler, consistently ranked as the number one ski resort in North America by both Skiing Magazine and Conde Nast Traveler. Whistler and Blackcomb Mountains offer spectacular skiing for at least six months of the year and will be home to the snow events at the 2010 Olympic Winter Games. The resort has been given top marks in such categories as terrain, vertical drop, high-speed lifts, depth of snow and slopeside amenities. It is a full service resort for both skiers and snowboarders, with exciting apres-ski venues and gourmet dining. Other activities range from ice-climbing to dog-sledding, snowshoeing and crosscountry skiing.

Whistler is a year-round destination. Home to four championship golf courses, designed by such famous pros as Jack Nicklaus and Arnold Palmer, Whistler has become a world-class golf destination. In addition, guided nature walks, mountain-biking, hiking, white-water rafting, summer glacier skiing, horseback riding and all kinds of watersports on the area’s five lakes and many rivers can be enjoyed. A network of paved trails connects Whistler Village to other villages scattered throughout the Valley. Whistler itself is pedestrian-only and boasts eclectic boutiques and sunny sidewalk cafes. Summer time in Whistler is festival time.

North of Whistler is Pemberton, the gateway to the interior of BC. One of Pemberton’s claims to fame is that it was the first commercial area in the world to grow virus free seed potatoes, and it now produces 34 varieties, generating $2.4 million in revenuesfor the local economy. The valley is also becoming a resort destination, much like Whistler, where visitors can enjoy outdoor adventures in both summer and winter.

East of Pemberton the highway continues north through the First Nations community of Mount Currie and onto the Duffy Lake Road, which takes the traveler away from the lush forests of the coast, through alpine meadows and on to the dusty semi-arid environment of the Cariboo and interior regions of the province. The Duffy Lake Road provides wonderful views of lakes and glaciers. North of Mount Currie you will find Birkenhead Lake, a great fishing and wildlife destination.

The Sea-to-Sky corridor ends at the town of Lillooet, one of the oldest settlements in BC’s interior. The town was “Mile 0” on the historic Cariboo trail to the goldfields in the 1800’s. Today it relishes its colourful historic past with “the Bridge of the 23 Camels”, a Hangman’s Tree and the original office of renowned newspaper editor Margaret “Ma” Murray. The region is also a centre for the Ginseng industry, and you will see vast black shrouds stretched across the mountainsides, under which this root is matured.

Visit Sea-to-Sky country as part of the Coast Mountain Circle Tour. It is best taken by car, but BC Rail also offers service through the area. Whichever way you go, you’ll have a spectacular time!