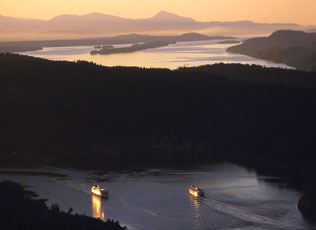 Eclectic villages, golden vistas, and rambling green countryside stretching to the bright blue waters of the Pacific Ocean. These magical islands in the Gulf of Georgia between Vancouver and Vancouver Island can be described in those simple terms, but there is so much more!

The Canadian Gulf Islands, Salt Spring, Gabriola, Galiano, Mayne, Saturna, and the Penders, like their American counterparts, the San Juan Islands of Washington State, are tranquil, peaceful havens from the bustle of the nearby cities of Vancouver, Seattle and Victoria. Spectacular scenery first attracts visitors, plus that unexplainable magic of being on an island. Diversity easily defines their intriguing populations and the range of attractions that keep visitors enthralled.

Salt Spring Island is the largest and most populous of the Islands, with a population of around 10,000. The main town of Ganges, acclaimed as one of the best small art towns in North America, boasts over a dozen art galleries on the “Gallery Walk”, a vibrant Arts Center for the performing arts, and a special appreciation for live music. The self-guided Studio Tour is a renowned juried tour of galleries and studios around the Island. High season is May 1 – September 30, but the tour does go year round. Saturdays from mid-April to mid-October, 8:30 to 3:30, Ganges features the Village Market, where local local farmers as well as craftspeople, artists and artisans, display and sell their goods. Great hiking spots on the Island include Mount Maxwell on Bruce Peak, or nearby Mount Tuam and Mount Erskine. Visit Ruckle Park for a great view of the BC Ferries coming through Active Pass. Recreational opportunities of all kinds, on water and on land, are available, including golf and tennis.

Gabriola Island is located just a 20-minute ferry ride from Nanaimo on Vancouver Island, and is the most northern of the Southern Gulf Islands. It is home to about 4500 people, and like all the Gulf Islands, a vibrant art community. In fact it calls itself “Isle of the Art”. The islands offers 45-km of shoreline for excellent kayaking, boating and public access to many beaches. Cycling is another popular activity on the island. At both Sandwell Provincial Park and Petroglyph Park you will find numerous examples of petroglyphs, whose origin remains a mystery. A sculpted, cave-like sandstone feature are the historic Malaspina Galleries, which can be reached at low tide from Gabriola Sands Provincial Park

Galiano Island is the driest of the Gulf Island and is the second largest island, with a population of around 1,000. It has a reputation as being one of the most welcoming of the Islands. Most of the Island’s amenities, which include a gas station, but no bank, are centered on the ferry terminal at Sturdies Bay. The Island retains an undeveloped character, and the islanders like it that way. They have worked hard to protect many of the natural features of their long and narrow island, including Mt. Galiano, Mt. Sutil and Bodega Ridge with its unique rocky bluff. Many rare and protected plants can also be found here. Galiano is home to Montague Harbour Provincial Marine Park, and a hub for kayaking in the Gulf Islands. Great mountain biking, hiking, birdwatching, scuba diving and beachcombing are some of the other adventurous activities enjoyed by residents and visitors alike.

Mayne Island is one of the smaller of the Gulf Islands, with a population around 900, and is especially interesting to history buffs. During the goldrush period in the mid-1800s, Vancouver Island miners would gather on Mayne Island before rowing across to the mainland of BC in search of elusive gold. Today, the island’s commercial centre is still called Miners Bay. The Mayne Island Museum is housed in a jail built in 1896, called Plumper Pass lockup. Like the other Gulf Islands, Mayne also offers endless recreational opportunities with beautiful beaches, kayaking, cycling, hiking and fishing, and a landscape of peaceful farmlands and western rainforests.

Saturna Island has a permanent population of around 300, preserving its rural character and charm, making it the least commercialized of the islands. Cycling, hiking and kayaking are popular pastimes and there is a rich marine life and over180 species of birds to be found on the Island. Almost half of Saturna is protected in the Gulf Islands National Park Preserve. The landscape ranges from forests to natural rock bluffs and picturesque bays. Most of the population is centered on Lyall Harbour and Boot Cove. Stop in for a visit to Saturna’s newest attraction and sample the wines of the Saturna Island Vineyard and Winery.

The Penders are North Pender and South Pender Islands. Once joined by a peninsula but later separated by a canal, they were not reconnected by a one-lane bridge until 1957. The total population is around 2400, with the majority living on North Pender, where most of the services and businesses are located. Parts of both islands are also protected in the Gulf Islands National Park Preserve. Inland regions are heavily forested, and outdoor recreation and sports activities abound here as well, including golf and discgolf. Pender also features a substantial artists’ community. Otter Bay is the main ferry terminal.

BC Ferries serves all of the Gulf Islands, especially Salt Spring Island, which has terminals at Fulford Harbour, Long Harbour and Vesuvius. Floatplanes and water taxis service the entire area as well, so it’s an easy journey to a special place. Experience first-hand why people who originally made this a vacation destination have been won over and made it their destination of a lifetime.