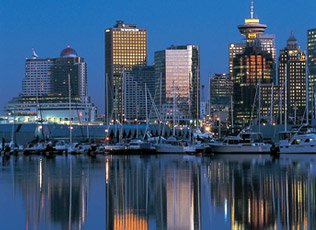 Vancouver: The world’s most livable city

Canada’s third largest city, Vancouver, is one of Canada’s most vibrant and multicultural cities. The Economist Intelligence Unit’s livability survey report has Vancouver tied for first place with Melbourne, Australia, as the world’s most livable city. As “Gateway to the Pacific” its location on the Pacific Ocean, has made it the busiest port in the country, and it exports more cargo than any other North American port. But its location between the ocean and the Coastal Mountains has also made it a preferred tourist destination. It’s spectacular scenery, sandy beaches, rain forests, and stunning mountains have hosted visitors from around the world. Outdoor attractions and activities abound; whale watching, scuba diving, hiking, cycling, kayaking, golf, sailing and skiing, all are especially enjoyable because of the mild climate year round. They say in Vancouver that you can “ski in the morning and sail in the afternoon” and it’s true!

Some of the major attractions include world famous Stanley Park. North America’s second largest Chinatown is just down from the city’s original settlement at Gastown. Don’t miss the University of British Columbia and its Museum of Anthropology, a leading museum of Pacifc Northwest Coast First Nations culture. The Vancouver Art Gallery has a significant collection of works by famous West Coast artist Emily Carr. Located between the two major bridges across False Creek is Granville Island, a hub of arts, boutiques, studios and a fantastic Public Market, offering the widest array of fresh food in the Lower Mainland, and a favorite place to meet. Two major parks not to be missed are Queen Elizabeth Park and Van Dusen Botanical Gardens. The city’s multicultural makeup provides a wide variety of excellent dining, shopping and performance experiences. 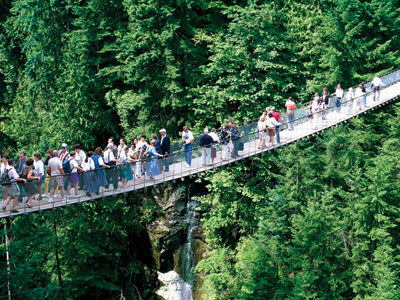 In an endless vista of unspoiled wilderness and stunning scenery, the North Shore, which includes the municipalities of West Vancouver and North Vancouver, is a unique and breathtaking location across the Lions Gate Bridge from downtown Vancouver, thereby offering spectacular views of the city. The North Shore is nestled at the foot of the Coast Mountain Range, and is home to Mount Seymour, Cypress Mountain and Grouse Mountain, all local ski areas. Grouse Mountain’s skyride takes you up the mountain winter and summer for even more fabulous views, and offers skiing in winter, and paragliding in summer. Also located on the mountain is a wildlife refuge for endangered animals.

Nature is at the North Shore’s doorstep. There is an abundance of mountain-biking and hiking trails, beaches and parks. With suspension footbridges at Lynn and Capilano canyons, the North Shore offers a naturally thrilling experience. Capilano Suspension Bridge is Vancouver’s premier tourist attraction, and also includes the award-winning Treetops Adventure. But fine dining, world-class shopping at boutiques and the Lonsdale Quay, are also part of the North Shore experience. West Vancouver is considered the wealthiest community, on a per capita basis, in the country. Other inviting communities include Ambleside, Deep Cove and Horseshoe Bay, with its ferry terminal. 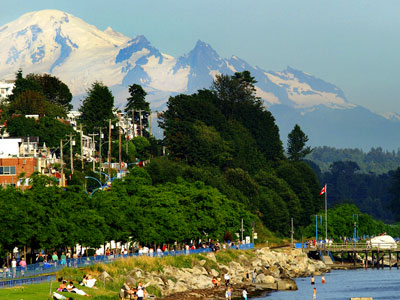 Just south of Vancouver is Richmond, recently named Canada’s healthiest city and home to the Vancouver International Airport. Richmond has some of the area’s best shopping, including the Asian-influenced Night Market. In the historic neighbourhood of Steveston, you can still buy fresh fish off the boats and eat fish and chips on the docks. Richmond’s location on Lulu Island in the mouth of the Fraser River have it surrounded by dikes, producing an extensive trail network.

Head south on Hwy. 99 through the tunnel and visit Reifel Migratory Bird Sanctuary, home to some 230 species of birds. The 20,000 snow geese who winter here make a most impressive sight. Enjoy quaint Ladner Village where you can stroll along wooden sidewalks and visit heritage buildings. Ladner’s location along the Fraser River also make it a great location for boating activities of all kinds. Tsawwassen ferry terminal nearby is the departure point for ferries to Victoria on Vancouver Island, and the Gulf Islands.

Just five minutes from the Canada/US border, in the southwest corner of the Lower Mainland, the seaside community of White Rock is particularly known as a retirement community. Its eight kilometre long sandy beach, its mild climate, the Heritage Pier and its promenade filled with boutiques and sidewalk cafes, much of it fully accessible to wheelchairs, make it an inviting community to everyone. White Rock is part of Surrey, one of Greater Vancouver’s fastest-growing communities, and the second largest city in British Columbia. With a large commercial sector, approximately one third of the city’s land base is still agricultural, and produces a substantial amount of the province’s agricultural products. There is also plenty of green space, as the city is known as “the City of Parks”. Cloverdale is where Surrey began as a farming and railroad community, and it still retains much of its small town charm. The Cloverdale Rodeo is a major event in the area. 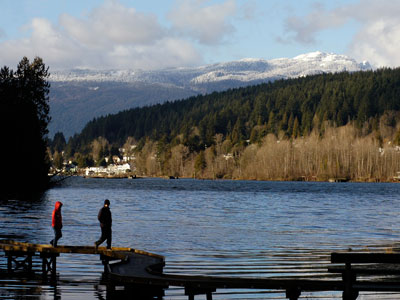 Greater Vancouver communities east of the city include Port Moody, Coquitlam, Port Coquitlam, Anmore and Belcarra. Port Moody is located at the eastern end of Burrard Inlet. Its protected waters and some of the region’s finest natural surroundings offer a wide variety of outdoor recreational opportunities. The area was first developed back in the 1880’s when Port Moody became the original western terminus of the Canadian Pacific Railway. Today some of the finest golf in the Vancouver area is available at Westwood Plateau, and fishing and boating activities abound in Port Moody and nearby Belcarra Regional Park. The neighbouring community of Anmore, which lies along Indian Arm, is one of three politically independent villages in the Greater Vancouver area. Residents here prefer to keep their semi-rural lifestyle. Anmore is home to the Buntzen Lake recreation area with its popular beach. The lake is used by BC Hydro to power two hydroelectric stations up Indian Arm.

Your visit to the Greater Vancouver area will be full of fascinating experiences in a picture perfect setting.