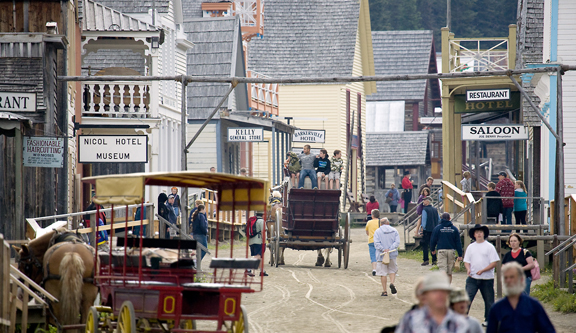 In 1862, a miner by the name of Billy Barker struck it rich during the gold rush in the foothills of the Cariboo mountains of what is now British Columbia. The town that sprang up around his strike was named after him and can be visited today, looking much as it did, then: Barkerville Historic Town.

Billy Barker did not just strike it “rich” but “fabulously rich.” His claim eventually yielded 37,500 ounces of gold – that’s 1,065 kgs/2,350 lbs of gold, folks – and was a major reason for the spurring of the Cariboo gold rush … and the eventual incorporation of British Columbia into Canada.

Billy Barker wasn’t alone up here, however. A wave of prospectors from all over North America and the world arrived in the region during the rush and, with the richness of the claims, the town of Barkerville flourished. For a time, it was the largest city north of San Francisco and west of Chicago on the North American continent.

Of course, history is notoriously fickle. As large as Barkerville was, by the time the gold rush played out to a trickle, the town that once held well over 5,000 residents faded away to a mere glimmer of its previous glory. Oh, there were resurgences, such as during the depression of the 1930’s when the uptick in gold prices brought some life back to towns like Barkerville – but they weren’t to last. Barkerville retreated to a small and tired mining village with a rich history and seemed doomed to stay that way.

In 1958, however, the far-sighted government of British Columbia decided to restore Barkerville as a historic attraction, mainly because of what was still here.

Although numerous gold rush towns arose in the 1800s, Barkerville Historic Town was unique in that over 100 of her original structures were still standing. The museum collection now contains over 187,000 objects and photographs from throughout the town’s history. Barkerville’s Chinatown collection is the largest of pre-railway, Chinese buildings in North America and one of the largest Chinese archival collections in Canada.

Barkerville Historic Town now appears as it did in its heyday – and awaits you. Tour the town with one of her colorful characters from the past, enjoy old west theater, pan for gold, and visit Barkerville’s well preserved Chinatown. Barkerville’s restaurants, shops, attractions, and residents are your ticket to the province’s rich – and still breathing! – history.

For directions and further details: www.barkerville.ca

Lodging in BC
Visiting the past is just fine – but no one wants to sleep there. When you’re in the Cariboo Chilcotin Coast region, or anywhere in British Columbia for that matter, don’t settle for the tired, old hotels and motels that try to convince you they’re the only place to stay. Try a British Columbia Bed and Breakfast Inn, instead, and realize the difference – it’s big, indeed!