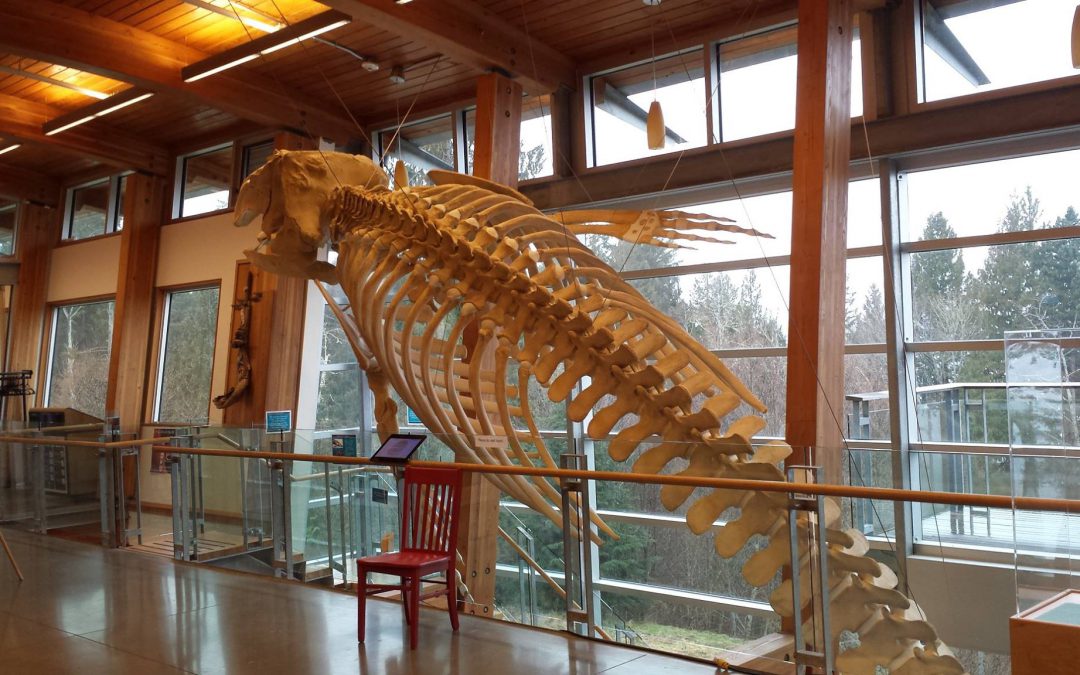 As the Red Chair continues to visit BC Bed & Breakfasts, he took one more bus ride to reach his next destination, Qualicum Beach on Vancouver Island. Waiting to welcome Red were innkeepers Bill and Anna Maria at Cornerstones B&B.  Innkeepers of less than a year, they were looking forward to showing Red around their new home on the Island. A surprise was waiting for Red when he arrived on Valentine’s Day and was serenaded by the Qualicum Beach Pipe Band!  He also received an official welcome to Qualicum Beach by the mayor and council; he was a VIC after all, i.e. a Very Important Chair.  Red and the innkeepers then hit the road to do some exploring.  Their first stop was Vancouver Island’s University Deep Bay Marine Station where Red was allowed to go right into the research labs and also studied a grey whale skeleton.  They visited Cathedral Grove where the biggest trees are over 800 years old, 250 ft. (75 m) high and 29 ft. (9 m) in diameter. You can imagine Red was a little intimidated! Little Qualicum Cheeseworks and Mooberry Wines were also definitely worth a visit, before a game of golf.  After all the winter sports the Red Chair had tried, it was a treat to play a relaxing game of golf, followed by a brew and a tasty bite to eat. Red enjoyed a very civilized afternoon tea at the beautiful Milner Gardens and visited the Old School House Arts Centre.  In between all the great outings to explore his first Vancouver Island community, Red relaxed at Cornerstones B&B and spent some quality time with the resident canine Coco! Vancouver Island was already a great place to visit and he’d only just started! 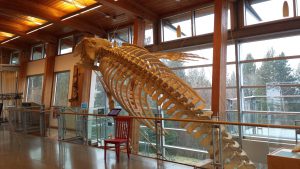 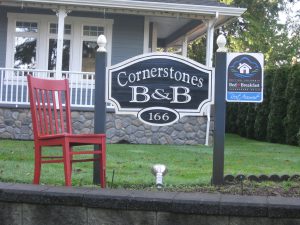 Red checks in at Cornerstones B&B in Qualicum Beach 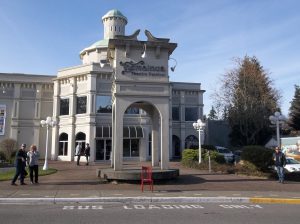 Red checks out the mural town of Chemainus and its popular Chemainus Theatre.

The Red Chair next headed south to Ladysmith Bed & Breakfast Hawley Place, where innkeepers Rhonda and Ed were ready to be his next hosts. Red had now arrived in the Cowichan region which has Canada’s only maritime Mediterranean climate zone, which allows for a wide variety of agricultural products, including award winning wineries. Innkeepers Rhonda and Ed took Red and introduced him to all the businesses around the historic First Avenue of downtown Ladysmith. They paid a visit to the Ladysmith Museum and wandered down to Transfer Beach, a great family friendly beach area with a playground, kayaking and summer music concerts. Ladysmith is also known for its Festival of Lights, when the whole town lights up for the holiday season.  Heading south out of town, they stopped for a visit at the Yellowpoint cranberry farm on their way to the “Little Town that Did”, Chemainus.  Known for its many outdoor murals, antiques and artisans, Chemainus is also home to the very popular Chemainus Theatre Festival.  Red was also in the right spot at the right time to witness a log barge unloading a load of logs.  Pretty cool. 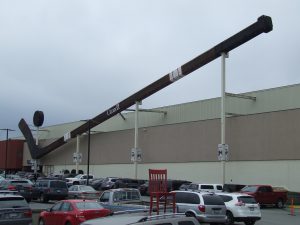 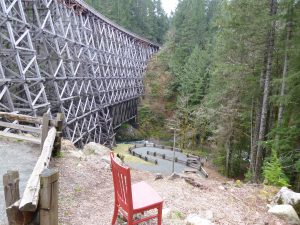 The Kinsol Trestle on the Trans Canada Trail is one of the highest trestles in the world. 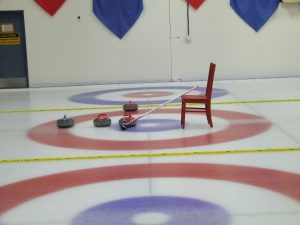 Rhonda and Ed traveled with the Red Chair down to Duncan, the commercial centre of the Cowichan Valley, to meet up with his next host, Ingrid, from Cobble House Bed & Breakfast, in the village of Cobble Hill. Red had heard that Duncan had the biggest hockey stick in the world so he definitely wanted to get a picture!  He also checked out the 1912 railway station and some of the many totems, as Duncan is known as The City of Totems.  He had now arrived in the heart of the Vancouver Island Wine Region, and not only did he visit several wineries like Blue Grouse and Unsworth, but also BC’s first estate cidery, Merridale Ciderworks, as well a Red Arrow brewery (of course he loved that name!) Another unique Cowichan company the Red Chair visited was the Vancouver Island Salt Company, which harvests and produces sea salt right from the waters here off Vancouver Island. Red visited the Teafarm, the only place in Canada that grows tea, and they had a special welcome sign out for him, as well as a tea room full of funky chairs to chat with! Innkeepers Ingrid and Simon also took Red to see the Kinsol Trestle on the Trans Canada Trail, one of the highest trestles in the world. The Trans Canada Trail will be the longest trail in the world once it is completed in 2017.  Of course the Red Chair did spend some time enjoying the peace at Cobble House, which is located on a forested acreage, and then spent his final morning with innkeeper Ingrid at the local curling centre!