It’s The End Of The BC Road For Red 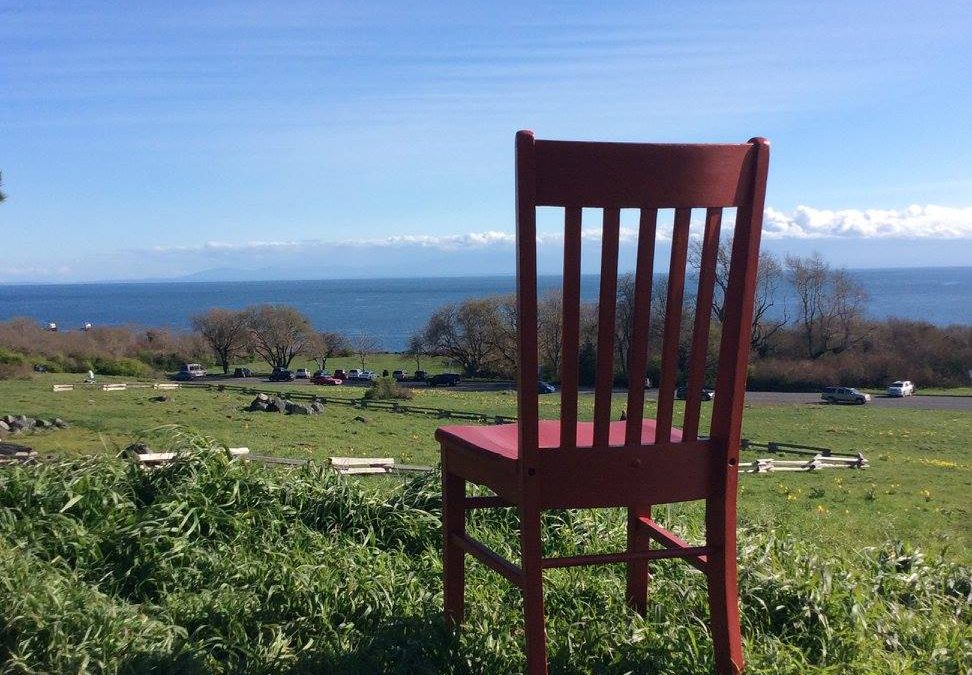 Sadly the Red Chair was nearing the end of his journey in British Columbia.  After his visits to Birds of A Feather Victoria Oceanfront and the Oak Bay Guest House, the Red Chair had one more visit scheduled at a Victoria Bed & Breakfast, Marketa’s. Unfortunately the innkeeper was ill when he arrived, which is always a challenge for a Bed & Breakfast, unless there is a partner or staff involved in the business.  So Red had a chance to rest up a little bit from his almost four months journey through beautiful British Columbia.  But, he did get to go out and about with Marketa to explore another part of Victoria.  The nice thing about Red’s visit to Victoria was that while Victoria has many famous attractions, Red got to explore some of the lesser known places around the city. 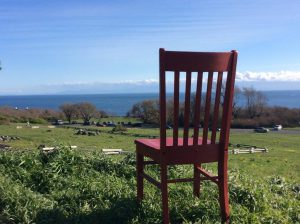 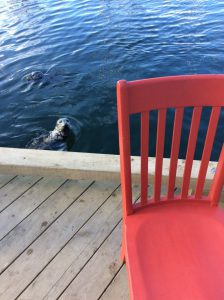 Red meets a seal at Fisherman’s Wharf in Victoria 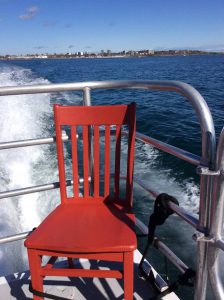 Off on a whale watching adventure with Eagle Wings!

Beacon Hill Park is a jewel right off Victoria’s oceanfront, where on a clear day you get a fantastic view across the ocean to the Olympic Mountains in Washington State. Many varieties of birds visit the park and Red made the acquaintance of a peacock, who wasn’t that impressed with Red’s color!  A wander down to Victoria’s Fisherman’s Wharf, with its funky shops, restaurants and float homes, led to a meeting with a different kind of critter, a curious seal, who was probably looking for a handout!  Red also had a lovely lunch at Marketa’s favorite trattoria.  His biggest adventure though, was on the water, when they went whale watching with Eagle Wings Tours.  What a thrill!  Red had been really lucky with the weather during his Victoria visit and had really enjoyed this City of Gardens in full spring colors! 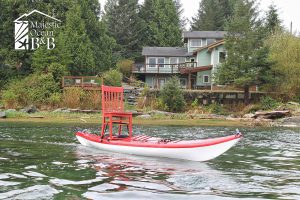 Kayaking past Majestic Ocean B&B on the Pacific 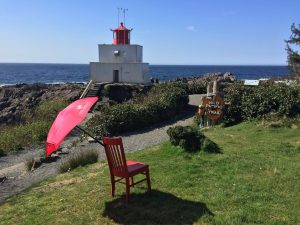 Red is ready to hit the Wild Pacific Train in Ucluelet 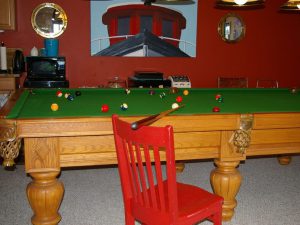 Another bus ride took Red up Island again and across to the west coast, to the little town of Ucluelet. Around Ucluelet and Tofino, its better known neighbouring community, you’ll find the famous Pacific Rim National Park Reserve which is made up of Long Beach, the Broken Group Islands and the West Coast Trail.  The Pacific Rim area is a hugely popular tourist destination almost year round.  Two of Ucluelet’s finest innkeepers shared their hospitality with Red.  Innkeeper Judy at Bostrom’s B&B on Little Beach Bay and innkeepers Tracy and Ted at Majestic Ocean B&B took Red on another whale watching trip!  Wow! Spring and fall on Vancouver Island’s west coast is the time for the grey whale migrations.

Ucluelet also has a wonderful aquarium that features only locally found sea life, and releases these critters back into the wild.  Talking about wild, Red had to take a walk on the Wild Pacific Trail, one of BC’s top trails according to TripAdvisor readers! This 9 km trail wanders along the coast through the rainforest with a different view around each corner. After his hike, Red relaxed on one of the several oceanview decks at Bostrom’s and tried out the sauna AND the hot tub before taking in a game of pool! Over at Majestic Ocean B&B and Kayaking, Red had another opportunity to go kayaking, right on the Pacific Ocean!  The Broken Group Islands are a favorite destination for kayakers and Majestic Ocean offers both lessons and guided trips to explore tiny islands and hidden coves.  Wildlife sightings can include bears, whales, eagles and many other sea creatures.  Here too he was able to relax in the hot tub at the end of another adventurous day, that also included a walk on Long Beach! 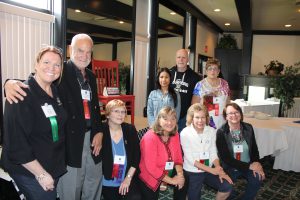 Red was reunited with some of his BC innkeeper hosts at the BC B&B Conference!

There was one more bus ride to go in Red’s journey in BC!  From Ucluelet Red headed back to Duncan in the Cowichan Valley, where innkeeper Ingrid picked him up so he could catch a ride with her to the BC Innkeepers Conference near Vancouver, where he was reunited with some of his previous BC Bed & Breakfast hosts!  This was going to be the end of Red’s journey through BC and we are so sad to see him go.  It’s been an honor to be Red’s first Canadian hosts, and to showcase the beautiful province we live in.  Many visitors each year share parts of the same journey that Red was able to enjoy, with all its attractions and recreational opportunities.  BC has so much to offer and we hope you too will come and visit.  We’ll be happy to host you and help make your trip an unforgettable journey too!  Safe travels Red!