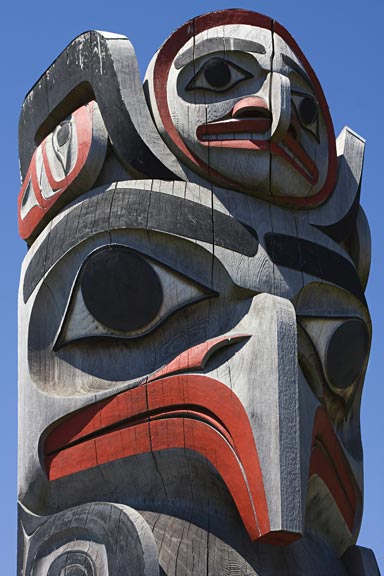 The Haida people are indigenous to the Pacific Northwest of North America and the Haida Heritage Centre at Kaay Llnagaay is dedicated to preserving and sharing this culture in and with the world.

The museum’s focus doesn’t just stop at the people. The Haida see the land and other animals on it as part of who they are and this is reflected in galleries exploring the rich natural history of the Islands.

Other buildings in the complex include:

The Performance House – designed as a traditional Haida style dugout longhouse, complete with cedar planks, it can seat up to 250 people.

The Canoe House – focused on that all-important tool of Haida transportation, resource gathering, trade, and nation-building, the canoe.

The Bill Reid Teaching Centre – hosting a continuation of the Haida art forms and techniques via new generations of Haida apprentices who come to learn from master Haida carvers and designers.

The Carving House – where monumental poles, canoes and other objects too large to fit within the enclosed carving space are housed during the carving process.

Explore the complex on your own or take one of the guided tours. Haida Heritage Center tours focus in-depth on different aspects of Haida culture, including totem poles, canoes, and weaving. There’s even an Outbound Tour where you get to paddle out into the inlet with other visitors and a guide in a Haida canoe! This last tour is, understandably, weather and tide dependent.

The Haida Heritage Centre at Kay Llnagaay also has numerous exhibition spaces and classrooms available to let, as well as a gift shop. You could easily spend a good chunk of your day here, which is just fine because the Kay Kitchen Café in the Welcome House serves hot lunches, coffee, and snacks!

For more details on what to do and how to visit The Haida Heritage Centre, please visit their website at: www.haidaheritagecentre.com