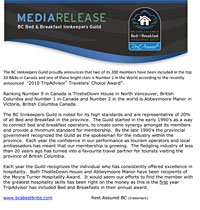 The BC Innkeepers Guild proudly announces that two of its 200 members have been included in the top 10 B&Bs in Canada and one of these bright stars is Number 2 in the World according to the recently announced “2010 TripAdvisor® Travelers’ Choice Award”.
Ranking Number 9 in Canada is ThistleDown House in North Vancouver, British Columbia and Number 1 in Canada and Number 2 in the world is Abbeymoore Manor in Victoria, British Columbia Canada.
The BC Innkeepers Guild is noted for its high standards and are representative of 20% of all Bed and Breakfast in the province. The Guild started in the early 1990’s as a way to connect bed and breakfast operators, to create some synergy amongst its members and provide a minimum standard for membership. By the late 1990’s the provincial government recognized the Guild as the spokesman for the industry within the province. Each year the confidence in our performance as tourism operators and local ambassadors has meant that our membership is growing. The fledgling industry of less than 20 years ago has turned into a favourite travel partner for tourists visiting the province of British Columbia.
Each year the Guild recognizes the individual who has consistently offered excellence in hospitality. Both ThistleDown House and Abbeymoore Manor have been recipients of the Moyra Turner Hospitality Award. It would seem our efforts to find the member with the greatest hospitality skills has been right on the money as this is the first year TripAdvisor has included Bed and Breakfasts in their annual award.