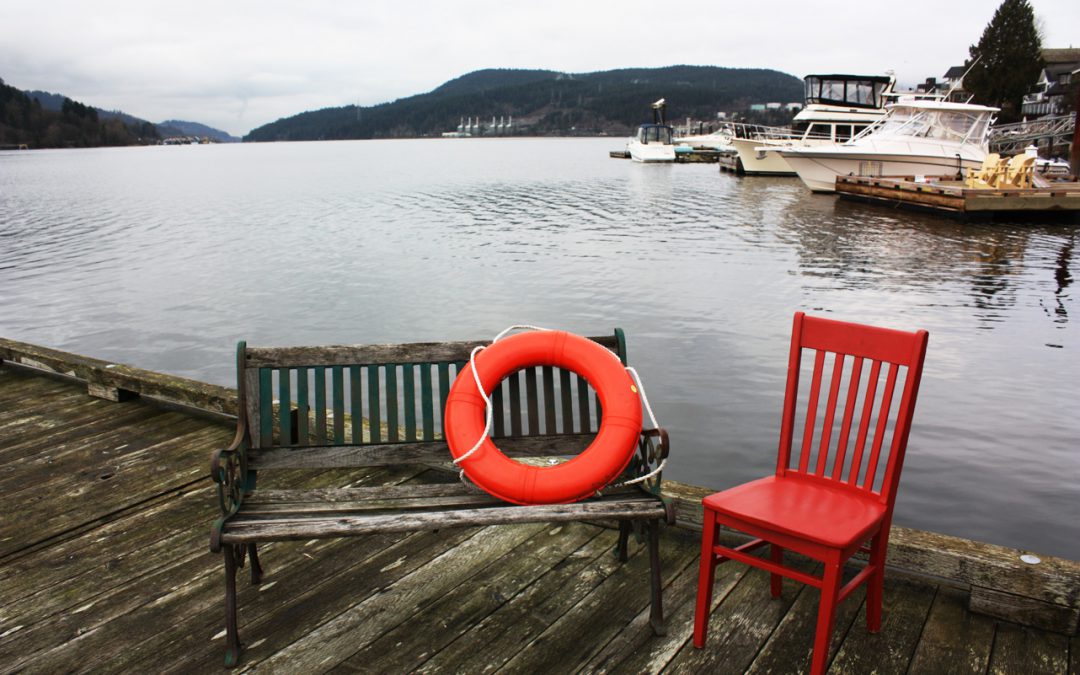 The Red Chair Travels second stop on its first ever trip to Canada was in the Metro Vancouver community of Port Moody.  As innkeepers Mary Ellen and Barry at Port Moody’s Mainstay Oasis B&B welcomed him, Red was starting to get into the Christmas spirit.  From their waterfront dock on Burrard Inlet, Mainstay Oasis guests and Red were able to enjoy the carol ships.  Red also enjoyed one of Mainstay’s afternoon tea parties by the Christmas tree.  And of course Mary Ellen took Red to show him all the special places in her community: they walked the trails in the rainforest at Buntzen Lake and caught some sunshine and a break in the rain; they stopped at the Moody Station Museum and the Port Moody Arts Centre; they admired the engine sculpture at Port Moody City Hall and then returned to Mainstay to relax on the dock with a friend.

Red relaxing on the dock at Mainstay Oasis after a day of touring the Port Moody area.

To get to his next friendly B&B destination, Red had to hop a bus to get through the Coastal mountains to West Kelowna, as there was quite a bit of snow on the roads to the BC interior.  Sue and Dann at West Kelowna’s A View to Remember B&B were Red’s next hosts and he would be staying with them through Christmas. And boy, did they have a busy schedule planned for Red!  West Kelowna is in the Thompson Okanagan region of BC, known for its many wineries and fruit orchards.  The southern Okanagan has Canada’s only true desert at Osoyoos.  Red ‘s first breakfast at A View to Remember included some local mapleapple syrup on his french toast!  Then they were off to explore the shores of Okanagan Lake, the old CPR Wharf, the Gellatly Heritage Nut Farm and the Fur Brigade Trail.  To celebrate the holidays Sue took Red to see the Christmas light display at Candy Cane Lane and they rode the famous Kettle Valley Steam Train Christmas Train.  Of course this being wine country, winery visits were not forgotten and fortunately Red (and the innkeepers!) had a designated driver when they visited Bottleneck Drive and the Westside Wine Trail!  To top off this visit in the Kelowna area Sue took Red to meet the folks at the Green Tourism Canada office, as a View to Remember is a Green Tourism designated property.

at the entrance to Mission Hill Winery

Even though winter travel is a bit of a challenge here in BC, especially in the interior where Red will be traveling most of the next two months, his innkeeper hosts will get Red safely from one Bed & Breakfast to the next. Not as many visitors to our province get to see BC in the winter time so the Red Chair Travels is getting a a pretty special tour!